A rare opportunity to win a gorgeous art work for Tzfat

(Scroll to bottom of page to see paintings)

This is a real rare opportunity to own one of these exquisite pieces of art. From the unique work of the artist Ruth Knapp from Tzfat, we present a few of these gorgeous painting for you to possibly own.

All the processed from this raffle go to Atzmut Org. and your raffle ticket is 100% Tzedaka and tax deductible (In the USA)

Please browse the paintings below. You can enlarge the picture by clicking on the image. In real life the paintings are 100 times more vibrant and beautiful.

The paintings offered for this raffle (Click the image to enlarge) 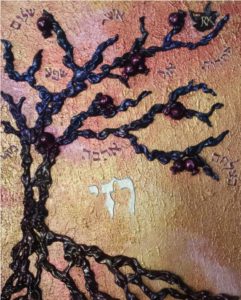 This 3D tree contains many blessings. The main gateway to these blessings is the aspect of ‘Chai’.

The Kabbalah teaches that this is an acronym for ‘yodei Chen’ , the knowers of the secret wisdom. (Literally ‘knowers of grace’. Chen/ grace is itself an acronym for Chochmah Nistarah, hidden wisdom.)

In the levels of the Torah this is the sod/secret  and the ‘razin d’razin’ the ‘secrets of the secrets’.

The Ba’al Shem Tov revealed that the Mashiach will come when we reveal the deepest secrets of Chai. This is why the Ba’al Shem Tov’s teacher was called the Master of Chai. 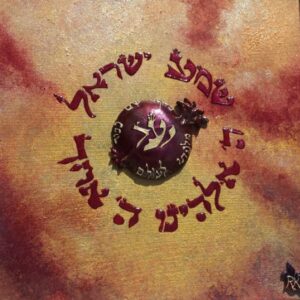 The Zohar explains that Shema Yisrael is the higher unity, Sovev kol Almin (the light that surrounds the worlds-Ohr Makkif).

Whereas ‘Baruch Shem Kavod’ Is the lower unity, Memale Kol Almin (the light that fills all worlds- Ohr Pnimi).

This is symbolized in the painting as the Shema Yisrael in the outside surrounding Circle. (Makkif)

Baruch Shem Kevod is therefore in the inside on a pomegranate.  Just as Baruch Shem is the light that fills all worlds which were created in the seven days of creation (six days of work and the seventh to rest), the pomegranate is the last of the seven fruits which are connected to the Holy Land.

The pomegranate is a fruit which is eaten (Pnimi) for pleasure and likewise Baruch Shem represents how a person connects to G-d in a personal internalized way (Pnimi) giving G-d great pleasure in making a dwelling place in the lower world. 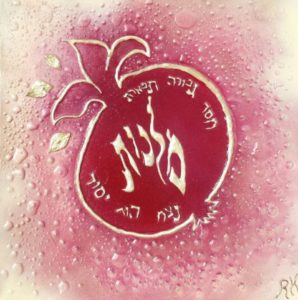 The painting depicts the pomegranate which is one of the special seven fruits connected to
the Holy Land of Israel.
The Sages teach (in the Gemara Brachot) that the
pomegranate is a symbol of physical and spiritual
wealth.
Malchut/ kingdom and royalty is the seventh spiritual
emotional power of the soul.

It makes sense that it is customary to eat the
pomegranate on the New Year, Rosh HaShana, which
begins in Tishrei, the seventh month. This may be
because the pomegranate is also the last, seventh fruit of
the Sheva HaMinim.

All sevenths are beloved, not necessarily because of their own quality but because they have
inherited their specialness from the previous six. (i.e. It is impossible to reach the number
seven without counting the previous six numbers.)
The red and white background represent the red and white seeds of the pomegranate
symbolic of all judgments (red) becoming sweetened by kindness (white) 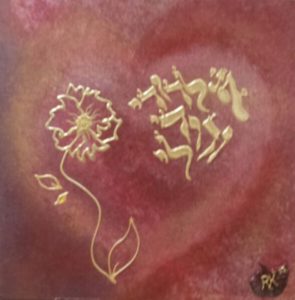 This verse is from the ultimate love song from King Solomon, Song of Songs, describing the reciprocal nature of love.

In the Kabbalah, this mirror effect (cause and effect, namely whatever energy one metes out is reflected back. If a person behaves with loving kindnesses and faithfulness, this is what is reflected back to the person, whether it be in love, business, health etc.) is called the ‘Tree of Life’

The verse Ani l’Dodi V’ Dodi Li / ‘I am to My Beloved and My Beloved is to me’ is related to the thirteen attributes of Mercy. This is a love that has no limitations and therefore lasts forever.

This is because the numerical value for love/ahavah is 13 the same as Echad/one, which we describe as G-d is One/Echad... in other words, the love is beyond limitations and is ‘G-dly’. 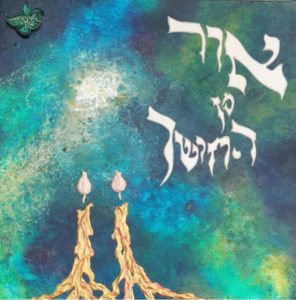 The advantage of light from darkness is in the fact that the level of light (that is needed to transform the darkness) comes from a very deep hidden place, from the essence of the soul

The two lights of Shabbat represent the Jewish people testifying that G-d is the Creator of the world.

In the laws of testimony, a minimum of two witnesses are needed. Testimony is only necessary for something that is hidden and will not be eventually revealed.

This is the  Light from Darkness/ Ohr Min haChoshech.

This is connected to why the Hebrew letters of haShabbat  השבת  spells Teshuva, תשובה return. To return and improve to reveal light from darkness. To transform all negative into positive. 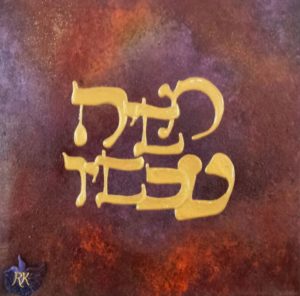 This emphasizes training ourselves to live in the moment, with a redemptive frame of mind.

This means the redemption and Mashiach are practical realities that can be revealed for individuals  immediately and for the entire world immediately versus a theoretical concept of some future time frame.

The Kabbalah teaches that past, present and future are connected to the intellectual powers. The trait of Da’at/ Knowledge is represented by the present now.

This is connected to rectifying one’s knowledge (the Tree of Knowledge) by living in the now, doing good deeds at every possible moment.

The letters are rendered in ‘Rashi‘ script, the special lettering used in the margins of the Talmud. This symbolizes bringing the concepts of Mashiach to influence even our scholarly ‘Talmudic’ intellect and knowledge.

It is known that Mashiach will teach even the great scholars (Tzaddikim) to Teshuvah.

The Chassidut teaches that the soul is ‘full of letters’

Each of the twenty two letters of the Hebrew Aleph Beit represent the spiritual building blocks of creation. They are the spiritual DNA of reality.

Man uses letters to communicate and reveal the hidden thoughts and feelings of the soul. Likewise, the spiritual letters were used to convey the concealed aspects of G-dliness.

When Mashiach comes, he will teach humanity to speak letters of light to ultimately reveal the Luminary, the Essence of G-d.